Варлаа́моVarlaamo-Khutynsky Spaso-Preobrazhensky Monastery is a female (formerly male) monastery of the Novgorod Diocese of the Russian Orthodox Church, located on the right bank of the Volkhov River in the Novgorodsky district of the Novgorod Region, on the northern outskirts of the village of Khutyn, 7 km from Veliky Novgorod and 3 km (as the crow flies) from Krechevits. 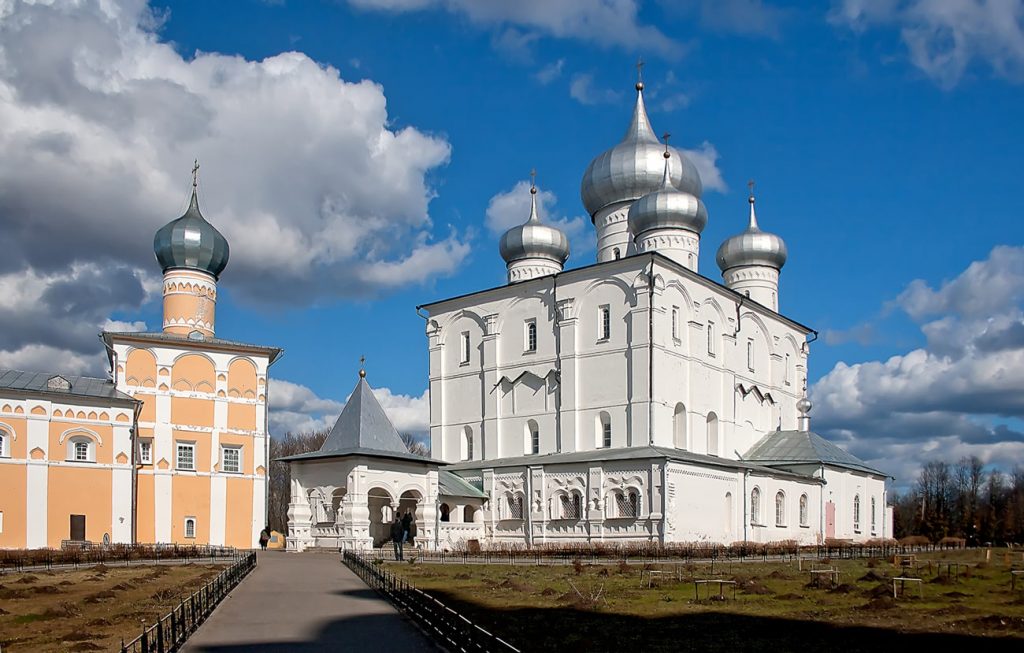 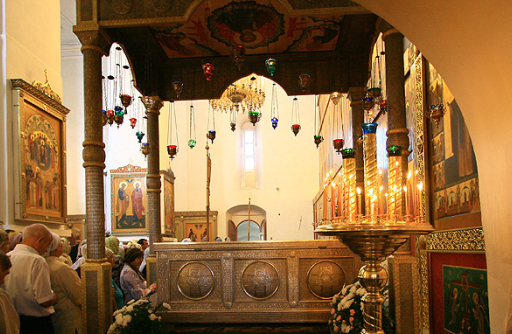 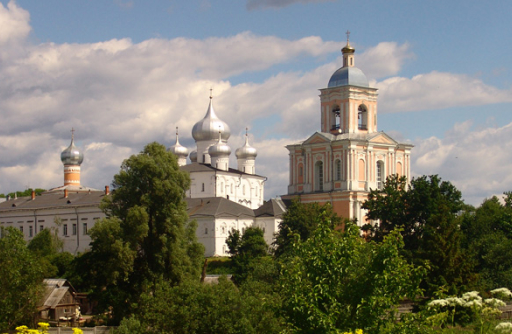 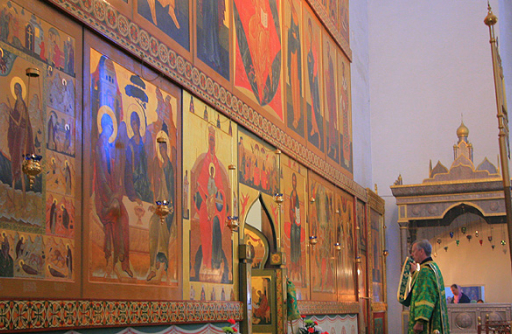 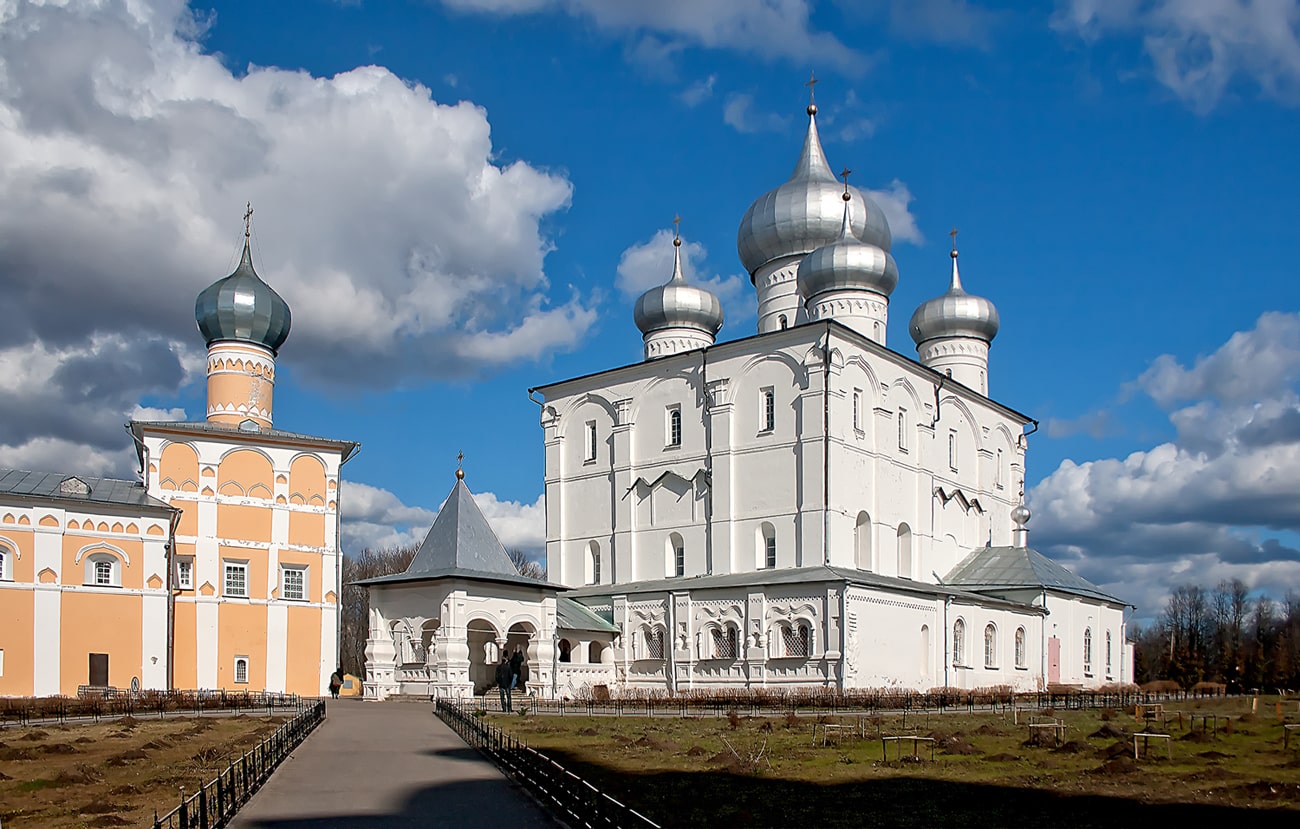 According to popular legend, this place was in the power of evil spirits and was called “Hutyn”, that is, a bad place. Here the monk Varlaam (in the world of Alex Mikhalevich) retired for prayer. One day Prince Yaroslav came to him. Barlaam, blessing him, said, ” Be well, prince, and with your noble son.” This greeting surprised the prince, who did not yet know about the birth of the baby (it was in 1190). After cutting down the cell and defeating the evil spirit, he built first a wooden and then a stone temple in the name of the Transfiguration of the Lord (the Church of the Savior on Hutyn). The church was consecrated on August 6, 1192 by Archbishop Gregory. The temple has not been preserved. In 1515, the Transfiguration Cathedral was built.

In 1471, John Vasilyevich the Third came to the Khutyn monastery to worship the holy relics, and, according to legend, he began to ask the abbot why they did not open the cancers so that everyone could venerate the holy relics. When, at his command, they began to dig up the grave of St. Barlaam, a pillar of fire burst out of the ground, scorching the wall and the southern door of the iconostasis. The Grand Duke ran out of the church in horror, striking the ground with his staff, and fire came out of the ground not only in the church, but also in the monastery. Throwing down his staff, the Grand Duke left the monastery in great fear. This staff and the scorched door of the altar were kept in the monastery sacristy.

In 1553-1557, the abbot of the monastery was a major hagiographer and the most prominent singer of the Novgorod school of the XVI century, Markell Bezborody.
In 1611, the monastery became the residence of the command of the Swedes who attacked Veliky Novgorod.

The ashes of the poet Gavriil Derzhavin and his wife Daria are buried in the Transfiguration Cathedral of the Khutyn Monastery. Derzhavin died in 1816 at his home in the estate “Zvanka”. The coffin with the body of the deceased on a barge along the Volkhov went to the last refuge. Archbishop Anthony (Znamensky), Bishop Sylvester (Tsvetkov) of Old Russia and Bishop Arseniy (Ivashchenko) of Kirillov are also buried in the monastery cathedral.

The monastery was closed in 1925, but services were still held in the monastery cathedral until 1932. The title of Archbishop of Khutyn was borne by Alexy (Simansky); in the cathedral in 1930-1932, the future Archimandrite Pavel (Gruzdev) sang and read in the choir.

During the Great Patriotic War, the monastery was destroyed and remained in ruins for more than 40 years. Derzhavin’s grave was also damaged. In 1959, the remains of the poet and his wife were reburied in the Novgorod Detinets. In 1993, in connection with the 250th anniversary of the poet, his remains were returned to the monastery.

Since April 20, 1994-an active women’s monastery. The abbess is Abbess Alexia (Simdyankina). As of January 2012, more than 100 sisters lived in the monastery, there is a courtyard in the village of Bykovo in the Valdai district.