Rurikovo settlement — Gorodishche) is a trade, craft and military-administrative center of the Ilmenye, a settlement, an archaeological monument of the IX century, located in Veliky Novgorod 2 km south of the city center, at the source of the Volkhov River from Lake Ilmen (opposite the Yuriev Monastery). It is also known as the residence of the Novgorod princes, with which many names of famous political figures of Ancient Russia are associated. 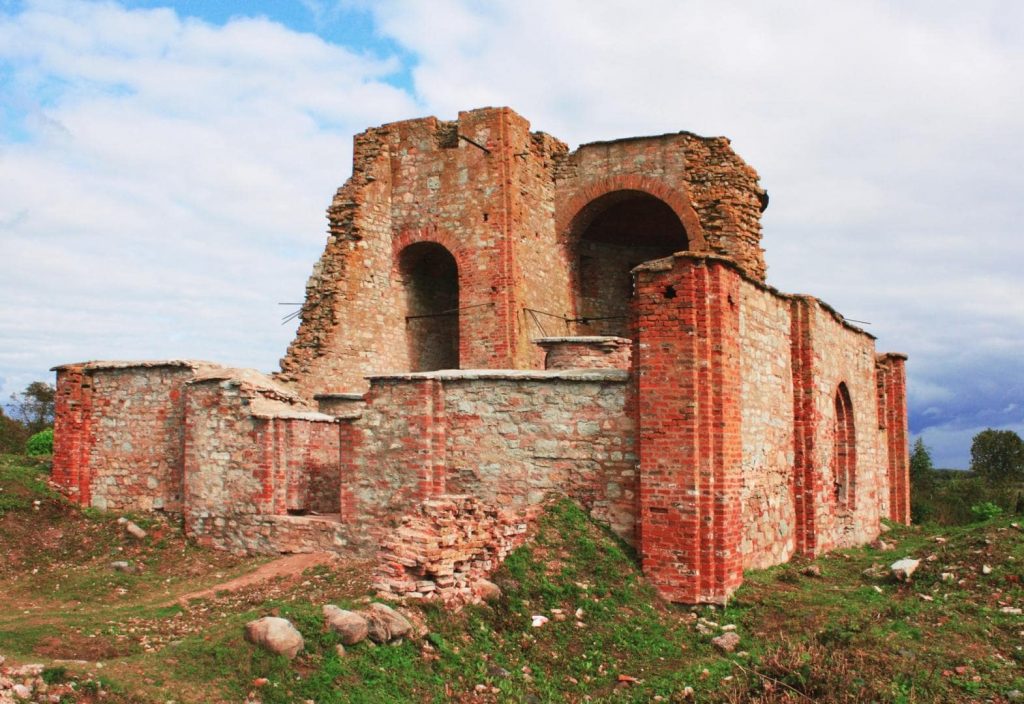 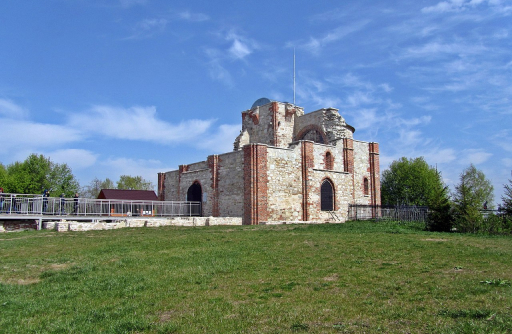 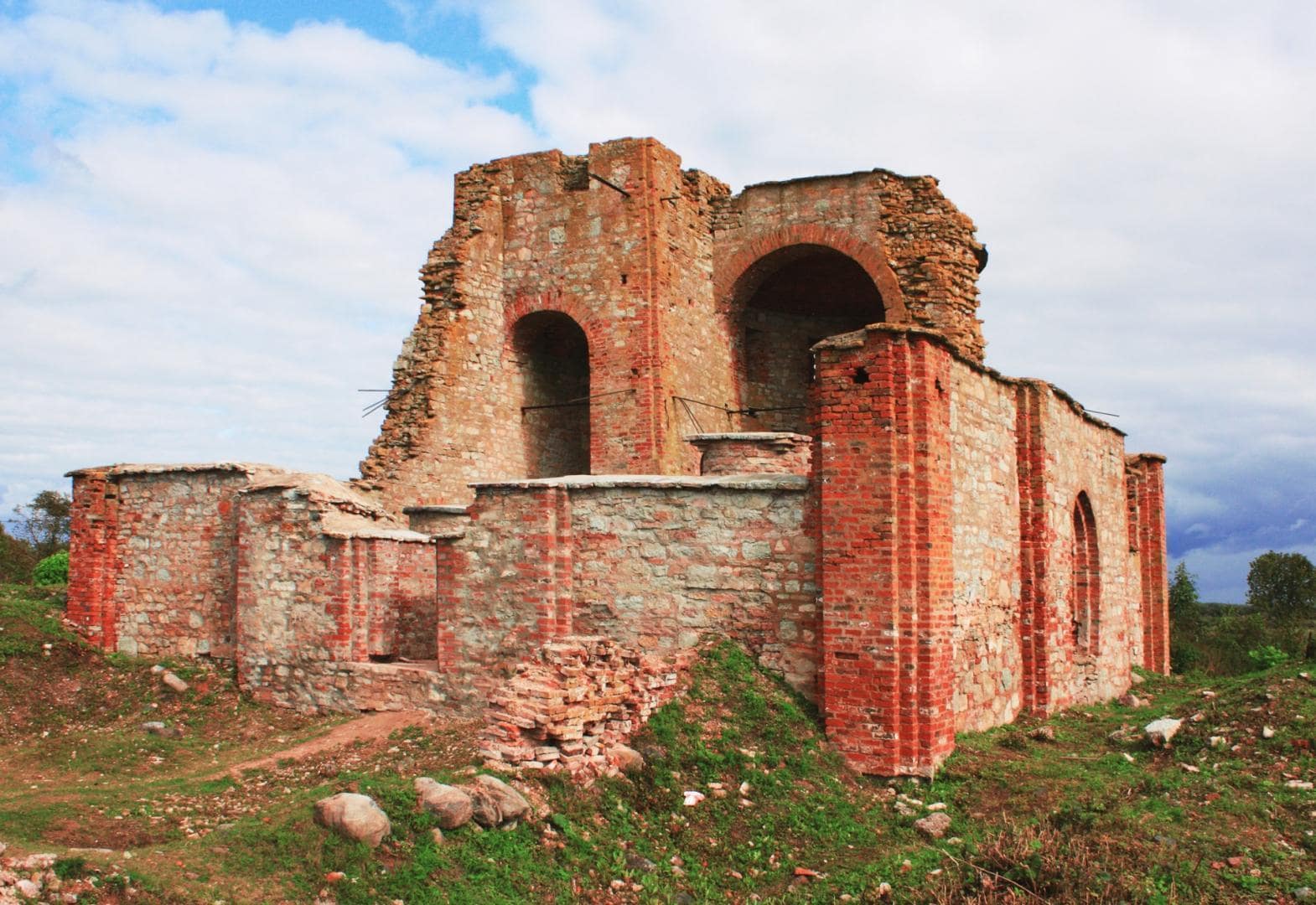 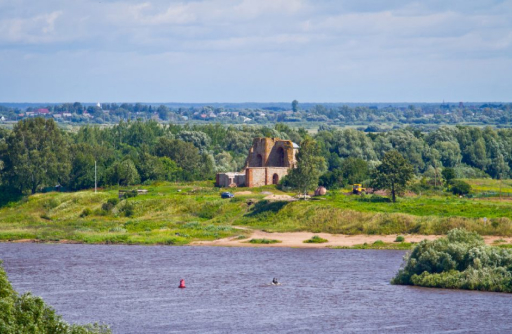 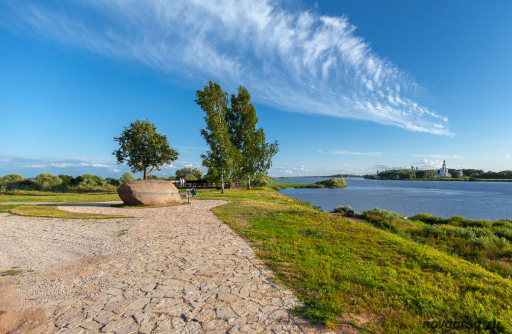 Until the XIX century, the tract, as well as the adjacent village, was simply called the Settlement. The word Rurikovo appeared in the local history literature at the beginning of the XIX century, under the influence of legends that identified this place with the capital of the state of Rurik after the vocation of the Varangians. V. L. Yanin wrote: “The settlement, which was so called in the XII century, which testifies to the great antiquity of this point, however, was never called Rurikov; this addition to its name, which was the fruit of learned reminiscences of amateurs, it received only in the local history literature of the XIX – XX centuries.” The ancient layers on the Settlement have no direct genetic links with the early Novgorod antiquities.

The Rurikovo settlement of the 1st epoch of the early metal – early Iron Age has a cultural layer with hatched ceramics dating back to the first centuries of our era.

The Rurikovo settlement of the 2nd VII-VIII centuries was a hill-type town fortified with stepped escarpments. It had the greatest similarity with the stepped fortifications of the Bronnitsky settlement in the Eastern Priilmenye (the village of Bronnitsa).

Rurikovo Settlement 3 is losing its military significance, and its central part is opening up. At the Blagoveshchensk excavation site under the oldest fortification (under the Gorodishchensky rampart, fortified with log cabins), archaeologists found a cultural layer of a small town with Slavic stucco ceramics and traces of fire. The layer dates from the VIII – first half of the IX century.

Rurikovo Settlement 4 has a cultural layer with exclusively molded smooth-walled ceramics dating back to the VII-IX centuries.

The settlement of the Ilmen Slovens, which had a wooden wall on the rampart, in the IX—X centuries was the first pre-urban settlement in the area of present-day Veliky Novgorod, presumably the oldest “New City” of Russian chronicles. The settlement occupied the cape part of the upland, located on a low-lying island among the flooded floodplain. The initial area of the settlement was up to 1-1.2 hectares. The width of the Gorodishchensky shaft reached eight meters, and the height could reach five meters. The central part of the settlement of Rurikovo Settlement 5 was fortified with a horseshoe-shaped moat and a shaft with wooden structures inside. Scientists date the towns filled with sand to 850-900 years. During the excavations, a horn-mounted comb covered with a braided ornament and rook rivets were found. From an engineering point of view, the fortifications of the Rurik settlement with their horseshoe-shaped rampart open towards the big water, with a section of the floodplain shoreline included in the fenced space, are similar in layout to the D-shaped Western Slavic fortifications erected on the low river banks between the Vistula and the Elbe, as well as with the semi-ring fortifications of the Vikings in Repton, Wimblington, Shillington, Annagassan. The Rurikovo settlement, as well as the settlements of Georgy and Sergov Gorodok on the Veryage, actually represent fortified ship parking. The most similar to the early fortifications of the Rurik settlement are the later fortifications on Starokievskaya Mountain.

The bakery oven in the low part of the settlement on the Hillfort is dendrochronologically dated by the fence to the last decade of the IX century (three dendrodates were obtained for the cuts – 889, 896 and 897) and has full analogues in Gdansk and Szczecin, which indicates direct links with the Slavic South Baltic region. From this time, organic remains have been preserved in the layers, which puts the materials of the excavation of the monument on a par with the materials of the excavations of Staraya Ladoga and Novgorod. Below the dated remains of the tree there is a cultural layer with a thickness of at least 1 meter.

According to one of the versions of the interpretation of the “Tale of Bygone Years” about the vocation of Prince Rurik by the Novgorodians in 862, the princely residence was located on the Settlement (however, according to another version of the reading of the “Tale of Bygone Years”, this entry is attributed to Ladoga). Most likely, Rurik was present both in Staraya Ladoga and at the Rurik settlement, given that these points were part of the same trade route.

The settlement had an extremely advantageous location, since its territory was protected from all sides by water borders. From Gorodishchensky hill it was easy to control the passage of ships from Volkhov to Lake Ilmen. On the opposite bank of the Volkhov, upstream of the princely fortress, there was an ancient pagan sanctuary — Peryn. One of the most important activities of the population was handicraft (bronze casting, bone cutting, etc.). By the turn of the IX-X centuries, the once powerful wood-earth fortress had fallen into disrepair and was badly destroyed.

Rurikovo Settlement 6 in the X century experienced its heyday.

During archaeological studies of the layers of the IX-XI centuries, a significant number of finds of military equipment and clothing of the Scandinavians (Varangians) were discovered, a birch bark letter, six lead princely seals of the XII—XV centuries, Arab, Byzantine and Western European coins were discovered (including three treasures of dirhams, two of which date back to the end of 850 and the end of 860, and the third — X century), glass, carnelian and crystal beads, walnut shells and almond pits, objects of Scandinavian and Baltic types (equal-shouldered, shell-shaped and ring-shaped fibulae, iron hryvnia with Torus hammers, two bronze pendants with runic inscriptions (and one copied from the other), a silver Valkyrie figurine, etc.), parts of scales, weight weights, Frisian-type combs, wooden toy swords, clay sinkers from vertical looms, old Russian glass bracelets, crucibles, lyachki, spinning wheels, counting tags, finials with zoomorphic images, birch bark bottoms and lids with signs scratched on them, fragments of amphorae. According to the number of double-tipped arrowheads characteristic of the Western Slavs, the Rurik settlement clearly stands out among the monuments of the forest zone of Eastern Europe, where their finds are rare.

At the end of the X century, the settlement, retaining the role of a residence, gave way to the role of the socio-economic center of the Priilmenye to a new settlement that grew apart from it around the emerging Christian complex and the bishop’s court (Novgorod Detinets).

The fortifications continued to collapse in the X-XI centuries, and by the beginning of the XII century they were completely lost in the relief of the Settlement.

At the beginning of the XI century, Yaroslav Vladimirovich the Wise moved his residence downstream of the Volkhov to the Auction, which affected the decrease in the intensity of life on the Rurik settlement. The residence of Prince Yaroslav, where not only the prince lived, but also his squad, was located at the source of the Volkhov River on the outskirts of Slavensky Hill on the territory still free from dense development by the beginning of the XI century. The princely residence was not protected by the walls of the detinets and was actually on a par with the rich urban estates.

In the last third of the XI century, due to the decline of the princely role and the increase in the functions of the Novgorod posadnik, the prince was forced to move again from Novgorod to the Rurik settlement, reserving the right to a residence in Novgorod.

There is a mention of the Settlement in the Novgorod chronicles in 1103 in connection with the construction on the instructions of the Novgorod Prince Mstislav of the Annunciation Temple — the second major princely temple after Sophia of Novgorod. For the construction, the moat was filled in and the shaft of the former fortress was partially demolished. The temple was built by master Peter— the first Russian architect, whose name is mentioned in the chronicles, along with St. George’s Cathedral of St. George Monastery and St. Nicholas Cathedral in Yaroslav’s Courtyard.

After the Novgorod uprising in 1136, which put an end to the dual power of the prince and the boyars (from the XI century to the beginning of the XII century), the residence of the prince, controlled by the Novgorod posadnik, was located on the territory of the Settlement. Alexander Nevsky spent his childhood here, Dmitry Donskoy, Vasily the Dark, Ivan III and Ivan the Terrible stayed here. On the territory of the settlement at different times there were 6 wooden and stone churches that were repeatedly renewed and rebuilt. These are the churches of St. Nicholas on the Hillfort, the Virgin of the Annunciation, Cosmas and Damian, Michael the Archangel, George and probably the Presentation of the Virgin.

1194 – repeated fires on the Settlement and in Novgorod.

In the XII century , the area of the settlement was 4-7 hectares .

During the siege of Novgorod in 1477-1478, the headquarters of Ivan III was located in the Settlement, at whose behest the architect Aristotle Fioravanti built a bridge over the Volkhov River from the Settlement to the Yuriev Monastery.