The Antoniev Monastery is a abolished monastery in Novgorod, one of the centers of the spiritual life of the Novgorod Republic. It is located on the right bank of the Volkhov River to the north of the city center. Address: Antonovo str., 1. 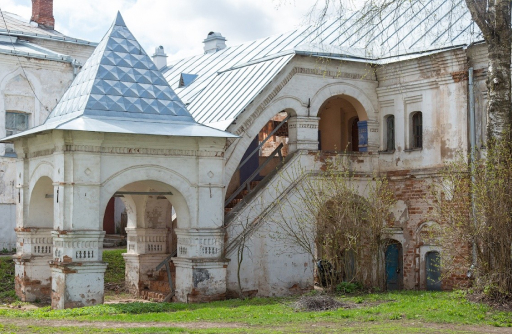 The founder and first abbot of the monastery was the Monk Anthony the Roman. The circumstances of his appearance in Novgorod are described in a life compiled in the XVI century and have a legendary character. According to the life, Anthony came from Rome and got to Novgorod in a wonderful way. During a solitary prayer, the rock on which he was standing broke away from the shore and sailed to the shores of Volkhov in the vicinity of Novgorod. According to the hagiography, this happened in 1106 on the Nativity of the Most Holy Theotokos (September 8). Here Anthony founded his monastery.

Although the origin of St. Anthony remains unclear, quite a lot of documentary information has been preserved about him and his monastery. The chronicles recorded his deeds with unusual attention for a private person. Anthony was a stranger in Novgorod. Nevertheless, Bishop Nikita blessed him for the creation of the monastery, which, in particular, is mentioned in the spiritual letter of St. Anthony preserved in the list of the XVI century (the text exactly repeats the original, dating from 1100-1130 years). However, after the death of Bishop Nikita, the Monk Anthony found himself in conflict with Prince Vsevolod and the new Bishop John Popyan for many years. It was only in 1131 that Archbishop Nifont, who ascended to the pulpit, appointed Anthony abbot of his monastery.

Fresco of the time of St. Anthony

There is a very plausible version of the appearance of Anthony in Novgorod, explaining, in particular, the reasons for the fierce conflict between him and Bishop John. The Monk Anthony could have come from the Kiev-Pechersk Monastery, which carried out extensive missionary activities. Perhaps it was part of the planned monastic development of the Novgorod land. The Bishops Nikita and Nifont, who supported Anthony, came from the Kiev-Pechersk Monastery. On the contrary, Bishop John was hostile to Kiev and probably even claimed autocephaly of his see from the Metropolitan of Kiev. Here, the already existing difficulties in the relations between Kiev and Novgorod manifested themselves, which increasingly showed a desire for independence.

Despite all the difficulties, the Monk Anthony was able to build a stone cathedral in his monastery and paint it with frescoes. To do this, he undoubtedly needed strong support from Kiev. The first Novgorod Chronicle marks the laying of the cathedral in 1117, and in 1119 speaks of the completion of construction. The cathedral was painted in 1125, and the refectory church was built in 1127. The Monk Anthony died in 1147, bequeathing the abbacy to his disciple Andrew, who later wrote the first extant text of the life of St. Anthony. During his time, the monastery deacon and domestic Kirik (a Novgorodian) studied music and mathematics.

In 1528, Archbishop Makarii of Novgorod introduced a cenobitic charter in the monastery. Soon, new construction work began. During the reign of Archimandrite Gerontius, in 1533-1536, the Sretensky Church and the church “under the bells” were built in honor of Anthony the Great. In the middle of the XVI century, the abbot of the monastery Veniamin found the stone of St. Anthony, lying on the bank of the Volkhov, and “planted” it in the outer wall of the cathedral. Now the stone of Anthony the Roman lies in the vestibule to the right of the entrance door to the cathedral under the image of Bishop Nikita of Novgorod. In 1558, a “Word of Praise” was written to the Monk Anthony. At the same time, his all-Russian veneration began to take shape, although the Venerable Anthony the Roman was officially included in the list of all-Russian saints only in 1597. This delay was connected with the oprichnina defeat of Novgorod in 1570, when all the brethren and the abbot of the monastery Gelasy were executed.

In 1708-1723, before the department was moved to the Alexander Nevsky Monastery, it was in the Antoniev Monastery that the residence of the Novgorod vicar bishops was located. During this period, the bishops carried out extensive construction work in the monastery (on the construction of a hospital with the church of Alexander Nevsky, a cellarer’s chamber, treasury and other cells, a kvass factory, a bathhouse, a new fence).

In 1740, through the efforts of Archbishop Ambrose (who bequeathed to bury himself on the porch of the monastery cathedral), the Novgorod Theological Seminary was founded at the monastery. Among the pets of her first issue (1754) was Tikhon Zadonsky. In 1788-1800, the status of the Novgorod Seminary was lowered to the level of a four-class one. With few exceptions, since 1743, the abbots of the Antoniev Monastery have also been rectors of the seminary. In 1918 the seminary was closed, and in 1920 the Antoniev Monastery was abolished.